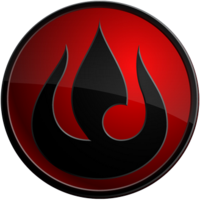 The Fire Nation has gone through some drastic domestic changes since the war ended and Fire Lord Zuko took the throne, but many things remain the same.

The Fire Nation is typically divided geographically into four categories: the outlands, or the outer islands to the east that border the Earth Kingdom; the inlands, the inner islands closer to the mainland and capital; the capital itself and the surrounding area on the island; and the north, a few islands just north of the capital that hold special significance. Considering the entire country is a string of islands, there is a surprising amount of cultural and economic difference in these different regions.

The Fire Nation capital houses the royal palace where both the Fire Lord and the central powers of government reside. It has two main areas: Harbor City and the Crater

The Crater is where the Fire Nation nobility live. It is also home to the Royal Palace, in which the Fire Lord and his family live.

Harbor City is a mainly industrial area below the crater. Poverty and crime run rampant here, and it is home to many lowlifes. However, Harbor City also has respectible citizens and many good places of business.

The inlands include the more industrialized and wealthy islands, including the Fire Fountain City, Ember Island, and Shu Jing, which historically and culturally represents the boundary of the inlands. Some farming is still done on the inlands but it has mostly given way to industry and factories, especially during the war. Without the war economy to drive them, most factories have switched over to making civilian goods to survive, and a number have been very successful at the transition.

The outlands begin right where Shu Jing ends and stretch until Fire Nation territory is a stone's throw from the Earth Kingdom. These islands, while smaller than the inlands, are many in number and serve mostly as agricultural centers. Not many people travel from the outlands to the inlands or even the capital, so the culture in the outlands tends to be a generation or two behind current Fire Nation culture in the inlands and capital. As a result, when "outlanders" as they are sometimes called do visit the capital, they are often teased for their outdated dress and mannerisms. Since the outlands relies on an agrarian culture to survive, the people are not as wealthy as in the inlands, and some resent the inlands, capital, and even nobility for this disparity.

There are a few islands to the north of the capital, formed more recently than the rest of the continent via volcanoes. Most of these tiny islands are still black igneous rock, and have no value or use to the majority of the Fire Nation, but a few of the larger and older ones are inhabitable. Among these islands is the Boiling Rock, the Fire Nation prison where many men and women lost their lives during the course of the war. Few prisoners are left in the Boiling Rock, as most were simply used as slave labor to keep the place running. Former Fire Lord Ozai was jailed on the Boiling Rock, but has since escaped and his whereabouts are unknown.

This is where the activities of the three factions of Hou Tian within the Fire Nation should be noted.

The Original People of the Flame -

Retrieved from "https://houtian.fandom.com/wiki/Fire_Nation?oldid=4812"
Community content is available under CC-BY-SA unless otherwise noted.