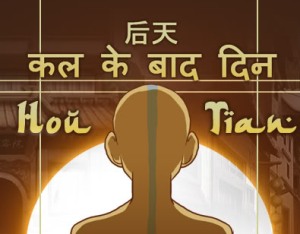 Everything You Ever Wanted to Know About Hou Tian: An Avatar, the Last Airbender RP
Edit

(And Possibly Some Things You Didn't)

THIS WIKI IS OUT OF DATE; PLEASE REFER TO THE MAIN SITE FOR INFORMATION.

It wasn’t really happy ever after.

Six and half years since Sozin’s comet and the peace earned by that fateful showdown has begun to fray at the edges. For some, they enjoyed an immediate turn of fortune toward prosperity—like the Earth Kingdom, newly-restored of all its land, resources, and previously-dethroned kings. Under the tutelage of the Avatar himself, the Southern Air Temple blossomed into a school of aspiring airbenders, intent on bringing balance to the elements in the world once again. Even the Water Tribes renewed their kinship and began to recoup the losses in the South Pole.

But not all were happy that the war had ended. The Fire Nation’s economy, crippled by its loss of industry and income from the colonies, struggles even now with civil unrest. People starve, and scores of soldiers feel disenfranchised now that the military no longer plays an instrumental role in the country’s future. There are those – firebenders – who remember the taste and feel of power and what it was to be on top. They hope to reclaim that “glory” again, under the banner of the Original People of the Flame.

And there are some who whisper that war is inevitable, that it will always be on the horizon so long as benders maintain control of the world. Behind the guise of freedom, prosperity, even a warped semblance of peace, they call themselves the Jade Shark and are led by the original Freedom Fighter himself, Jet. In the dark belly of Ba Sing Se they plot to even the playing field, rumblings aimed to reach every corner of their world—funded by a lucrative slave trade.

No, this is not the “happy ever after” many envisioned when the Phoenix King was defeated. Even that victory is threatened, for after years of waiting and plotting, he was smuggled out of the Boiling Rock and harbored in Shu Jing. Presumed dead to all but the Flame, his daughter is deemed the larger danger now; former princess Azula escaped her padded cell in the palace and slipped away to the Earth Kingdom, leaving a trail of destruction and ashes in her wake. A collaborative effort is underway to find her, but so far success seems as elusive as her rational mind—broken after the Agni Kai with her brother, now Fire Lord Zuko.

Unfortunately, the Fire Nation is not the only source of the world’s problems. An epidemic, birthed from the bowels of Ba Sing Se and the rebels therein, struck the city of walls and secrets full force. The population was decimated, the king himself rendered comatose, only recently showing signs of recovery to bolster the failing morale of the people. A quarantine segregated the three tiers even more, but too late. The plague has already spread to the north and west, with more cases reported daily. With no cure in sight, all healers can do is stem the tide, alleviate suffering, and pray for the best.

All hope, however, is not lost. Terrible as they may be, the events of recent months have sparked a universal cooperation of the nations unlike anything since the war. And while there’s been cause for heartache and pain along the way, there was also cause for joy. The Lady Ursa was restored to her home and family, Sokka and Suki were finally wed… Perhaps it’s not too far-fetched to believe there is a happy ending in store.

After all, our heroes learned the hard way that destiny is what you make it.

Hou Tian exists here. And is an open Roleplay.

Retrieved from "https://houtian.fandom.com/wiki/Hou_Tian:_An_Avatar,_the_Last_Airbender_RP_Wiki?oldid=5031"
Community content is available under CC-BY-SA unless otherwise noted.